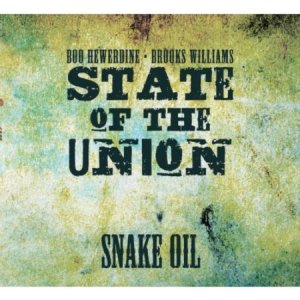 “Snake Oil”, the second collaborative album from national treasure Boo Hewerdine and Georgia-born, England-residing guitar virtuoso Brooks Williams, had a lot to live up to, as their first album was an absolute joy. I’m happy to confirm that their follow-up album is very close to being as wonderful as their first, but the second release concentrates more on the more vintage sounding tracks which littered the eponymous début. The folk/pop crossovers such as “Rent” or “Sweet Honey In The Rock” which made the first album such an eclectic delight are sadly absent on their latest collection, but what it does mean is that “Snake Oil”, as a whole, flows nicely with a slightly more coherent musical theme. It’s a slightly more laid-back album than its predecessor, but doesn’t suffer for being so.

Gentle, piano-led ballad “Blaze Of Glory” opens the album, with Hewerdine’s mellow, congenial vocals relating a dramatic, fatalistic, yet romantic tale in a beautiful and completely captivating way. “Haunted”, featuring guitar and ukulele, is a charming ragtime piece delivered by Williams and the weary title track, “Snake Oil” is an atmospheric piece with some lovely background harmonies, nice guitar work and the lyrics could easily be used as a metaphor for the mainstream music business. “Daydreamin’”, as the title suggests, is a delightfully lazy piece and Boo’s voice floats over a gently picked ukulele and guitar, and showcases a light, playful guitar solo. “Going Away” is a pleasant, gently-flowing song, the feel of which slightly betrays the hurt of the lyrics and “Man With The Hammer” is a subtle but decent toe-tapper which boasts some bluesy slide guitar but, unfortunately, both contribute to the feeling of a mid-album lull.

Luckily, the brilliantly likeable “Hellzapoppin’” takes “Snake Oil” on an uphill trajectory again, with lyrics and a infectious beat belonging to music made a century ago and the resigned and sublimely melancholy, “Rags and Bones” is a both a classic Hewerdine composition and vocal performance. “Leaving In Her Eyes” is beautiful and is one of those kind of songs that you’d expect to hear in a seventies Woody Allen film, being played over a gramophone, depicting early twentieth century America. “Georgia”, a slide-guitar-embellished ode to Brooks’ home state, manages to be amiable without really hitting the spot, but “Beyond The Next Horizon” concludes the album with a winningly descriptive, cheerful stroll of a song, signing off on a genial note.

Overall, “Snake Oil” is a really lovely album, a beautifully crafted piece of work which transports you back to another time and allows you to escape the realities of today’s hectic world, an antidote to the stresses of modern life which should really be available on prescription. A sepia photograph of the State Of The Union duo may have suited the content of the album more than the striking (but very classy) green and blue marbled album cover, but perhaps that’s an idea for the next album. Hopefully there will be a third collaboration, because Hewerdine and Williams together are a rather special combination and, from the sound of “Snake Oil”, our union is in a fine state.

You are reading the musings of a music-obsessed forty-something who was brought up on The Beatles, lived through Britpop and now spends his time in pursuit of the best music around. This 'blog gives me an outlet to write about the huge number of albums I buy and the many gigs I go to. All of the opinions expressed are my own and if you don't agree with me, then I understand - music is a very personal thing. I like to receive comments, especially if they're nice ones.
View all posts by A.D.S. →
This entry was posted in Album Review, Andy's Album Collection, Music and tagged Album Review, boo hewerdine, brooks williams, Snake Oil, state of the union. Bookmark the permalink.