All of us festival goers were blessed with beautiful sunshine today at Glastonbury and it was very warm, although not uncomfortably so.  I left my hotel a little later than yesterday (owing to a combination of a late night, writing and being a bit achy) and arrived at the festival at about 14:30 (courtesy of a casually racist taxi driver), just in time to catch the majority of Ed Harcourt‘s set at the Park Stage, situated way down at the south end of the site.  I thought I’d be there on time, but hadn’t counted on the half an hour walk from the drop-off point to the stage.  I got there just in time to see one of my favourite early songs of his, “God Protect Your Soul”, which I was very pleased not to have missed.  Ed’s set was, like his material, very eclectic and his musical open-mindedness was reflected in his performance.  Other highlights were “Born In The Seventies”, where Ed got the audience to sing back “We don’t really give a f**k about you” and “Apple Of My Eye” where he was joined by human beat-boxer Shlomo.  I made a resolution to get to a “proper” Harcourt gig when I could; the guy is excellent.

It was just after Ed finished when I realised that my iPhone Glastonbury app had stopped working and was freezing on the start-up page.  That little piece of programming contained all of my plans for the day, so I wasn’t thrilled.  It took me a few seconds to realise that I had a paper copy of the schedule in my lanyard and that all wasn’t lost, but it was a handy reminder not to get too comfortable and reliant on technology.  I then made the substantial walk up to the Acoustic Tent just in time to catch Deacon Blue’s Ricky Ross, who did an excellent mix of his new material and some Deacon Blue favourites.  “Wages Day” and “Real Gone Kid” got the crowd singing, but it was his gorgeous rendition of “When Will You (Make My Telephone Ring)” that was the undoubted highlight for me.  In fact, it was a bit of a Scottish afternoon at the Acoustic Tent.  Not sure if that was intentional or not, but following Ricky was the magnificent KT Tunstall and, with that, ended the pretence that this was an Acoustic Tent as the stressed roadies and sound engineers set up the stage for a full band.

I managed to get almost to the front for KT’s set and wasn’t disappointed as she gave a charismatic performance and was in great spirits, apart from when the equipment wouldn’t let her do “Chimes”, one of the songs from her superb new album (which she plugged unashamedly and rightly so, it’s an excellent piece of work), because of a distinctly audible buzzing.  The massive highlight for me was a beautiful performance of “The Other Side Of The World” which brought unexpected tears welling in my eyes and I struggled, unsuccessfully, to stop them from brimming over.  I also enjoyed “Feel It All” and, of course, “Black Horse And The Cherry Tree” which was delivered with a twist… halfway through, she introduced Shlomo, the beat-boxer who was with Ed Harcourt earlier, who came and added an extra dimension to the performance, which was further enhanced by KT seguing the song into The White Stripes’ “Seven Nation Army”, ending with a bit of a mash-up of the two songs.  It was very clever, a lot of fun and it really worked.  She ended her set in an unpredictable manner.  Whilst the majority of the audience were expecting “Suddenly I See” as her last song, she mischievously declared that she was going to do something a bit different, something by someone who was “here a few years ago”, something by “The Boss”.  It was at this point that the two teenage girls who were standing next to me turned round to the older guy they were with (I think it was one of the girls’ Dad) and asked, “Who is The Boss?”.  I noticed the flicker of a smile on his face when he told them it was Bruce Springsteen.  KT then finished with a passionate rendition of “State Trooper” which, I think everyone would agree, was a very unconventional ending for an excellent Tunstall set. 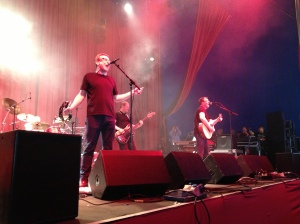 The Proclaimers at Glastonbury 2013

I then managed to get right to the front and, with great relief, was able to lean on the barrier to take some weight off my suffering legs and back and get a great position for The Proclaimers. Now, I’ve said this time and time again, but not many people seem to realise what an incredible band they are and I’m not exaggerating when I say that the hour I spent in their company this afternoon was the best part of my weekend so far.  They were absolutely f**king magnificent.  It was slightly annoying that the vast majority of the audience seemed to only be there for the big songs, but I can’t deny that the euphoria of hearing “Letter From America” and “I’m Gonna Be (500 Miles)” with the crowd singing along was almost overwhelmingly beautiful.  For me, I’m a massive Proclaimers fan, so nearly every song put a little joy in my heart, but I especially enjoyed “Spinning Around” (the key change towards the end is a wonderful moment), “Let’s Get Married”, “Life With You” (one of their best little known songs), “I’m On My Way”, “There’s A Touch” and a magnificent rendition of “Sunshine On Leith” which, for the second time today, sent the salt water cascading down my cheeks.  The violinist, dressed in a ballerina’s outfit (for some good reason, I’m sure), played a gorgeous solo which sent a collective shiver of appreciation through the audience.  Strangely enough, the Acoustic Tent was decorated with very elegant looking red curtains, which looked remarkably like the cover of The Proclaimers’ last album, “Like Comedy”.  No wonder they performed like they owned the place!  I left the Acoustic Tent and stepped, blinking, into the sunshine feeling on top of the world… apart from my very full bladder and the very urgent pleas from my back and legs to sit down. So, instead of seeking out an act to see in the ninety minutes I had before The Stones, I decided to head for a place I could sit down and get something to eat, so, all apologies to both Willy Mason and Newton Faulkner, my body, which seems to be old before its time, needed some looking after and the choice between the two of you became irrelevant.

One of the great things about Glastonbury is that everybody’s experience is different. Everyone has different priorities, different acts to see, different reasons to be there.  I know I’ve had to make some difficult decisions about which acts to see.  I missed Elvis Costello today in favour of KT Tunstall, for example, because now I know what it’s like to try to see an artist on the Pyramid Stage, I decided that the many times I saw him in June were going to be a much better, richer experience than standing there in a mass of people with legs aching, most likely watching Elvis on a screen rather than having a decent view.  If you want to get up front for a popular artist at the Pyramid Stage, you have to make lots of sacrifices.  Firstly, you have to pretty much stay there all day, watch everything (including the acts you don’t like), don’t drink much (otherwise you have enforced toilet breaks which will lose you your place) and not mind being completely and utterly hemmed in for hours on end.  Personally speaking, I really couldn’t do that, not for any artist.  Not for McCartney or even Bowie.  This may be a controversial opinion, but the Pyramid Stage at Glastonbury really isn’t the best way to see one of your music heroes for the first time… which leads me on to The Rolling Stones.

By the time I stood amongst a crowd of around 100,000 people, trying to get a glimpse of the screens (yes, that’s right, the screens, not the stage itself) for about an hour prior to the show, I was starting the feel a little nonplussed about the whole affair.  When they came on to a big shower of fireworks and broke into the first bars of “Jumping Jack Flash”, it sounded a bit limp.  However, when “Paint It Black” was played, I felt the first waves of real enjoyment wash over me and then “Gimmie Shelter” blew me away. Absolutely fantastic, even though the female backing singer almost stole the show.  Then it happened; my back went.  I don’t mean that it popped off to buy the beers, I mean that there was an absolutely excruciating pain which meant that I couldn’t stand any more and as Mick sang a really crap song called “Glastonbury Girl” with very painful references to ecstasy and pissing in streams, I fought my way through the crowds, which was extremely difficult in itself, literally crying out in pain with tears in my eyes, both of discomfort and disappointment and tried to get to the mid-stage area to sit down. Unfortunately, my way to the hospitality area was completely blocked off and the only thing I could do was to head out of the festival (which was a thirty minute walk from that point) and struggle back to my hotel… after only a few songs.  I tried to be philosophical.  Technically, I’ve seen The Rolling Stones live, but, when I got back to my hotel and watched the last few songs on the BBC, I couldn’t help feeling a little bit sick.  Having said that, watching it on television was so much better than being there.  The view was better, the sound was better and, as my painkillers started to kick in and I was able to relax a little on my bed, I suddenly didn’t feel quite as upset as I did before.

So, a bit of a sad ending for an otherwise brilliant day.  That’s two headliners I’ve blown out on, however, my biggest concern isn’t whether I don’t see Mumford & Sons tomorrow, it’s whether I actually go to the festival or not.  I’ll have to see how I feel in the morning.  At least I have it recorded at home and can watch most of the sets when I get back, even if I didn’t see the “big acts” whilst I was here.  Anyway, goodnight… and as to whether my Glastonbury experience ends here, it really depends on my back.  Fingers crossed.

You are reading the musings of a music-obsessed forty-something who was brought up on The Beatles, lived through Britpop and now spends his time in pursuit of the best music around. This 'blog gives me an outlet to write about the huge number of albums I buy and the many gigs I go to. All of the opinions expressed are my own and if you don't agree with me, then I understand - music is a very personal thing. I like to receive comments, especially if they're nice ones.
View all posts by A.D.S. →
This entry was posted in Glastonbury 2013, Music and tagged Deacon Blue, Ed Harcourt, Glastonbury, Glastonbury 2013, Glastonbury Festival, Glastonbury Review, KT Tunstall, Live Review, Ricky Ross, The Proclaimers, The Rolling Stones. Bookmark the permalink.