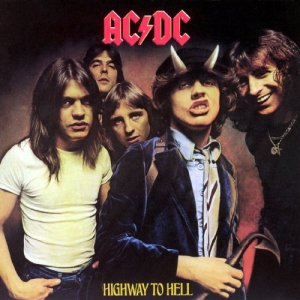 “Highway To Hell”, AC/DC’s fifth (international) album and their last to feature their late vocalist Bon Scott, is arguably the best of the Bon Scott era and certainly the most commercially successful.  It is also my personal favourite of all of the albums they made with Bon and the first of three consecutive works they recorded with legendary producer, Robert John “Mutt” Lange.  I think it’s fair to say that, sonically, they had never sounded better on record before this point, as Lange gave them a punch that they hadn’t quite managed to capture in the studio prior to this record.  Having said that, the compositions are very similar to those from all of their previous releases, so it is a case of “more of the same” from the band… not that that is a bad thing, if you like AC/DC.

The whole album is pretty fine and, listening to it from beginning to end, gives an impression of a band in excellent form, with little in the way of filler here.  I do have my favourites, though.  “Highway To Hell”, the storming opener, is about as famous as AC/DC songs get and the punchy riffs and catchy and easily singable chorus makes it a classic.  “Girls Got Rhythm” is huge fun, “Walk Over You” boasts an absolutely sizzling Angus Young solo and the high energy “Beating Around The Bush” features one of the best bluesy riffs the band ever composed.  “Shot Down In Flames” is fantastic and I just love the guitar work and Bon’s vocals; one of those priceless rock moments where every element in a song just works.

There’s a huge whiff of testosterone running through this album and nobody is going to award Bon Scott the “Feminist Of The Year, 1979” award for his lyrics, but I choose to see the posturing and macho swagger of the music as a bit of harmless fun, certainly of its time and should be taken with a pinch of salt.  Others may see it differently, but I really don’t think this isn’t the kind of music you should analyse too deeply.  Richard Ramirez took “Night Prowler” too seriously and most fans know what happened there (if you don’t, you can look it up, but I choose not going to give him any more publicity).  Knowing the history of the band, it is very sad to know that this was to be Scott’s last album, but he certainly went out on a high because “Highway To Hell” is one of the very best pieces of work AC/DC ever made.

You are reading the musings of a music-obsessed forty-something who was brought up on The Beatles, lived through Britpop and now spends his time in pursuit of the best music around. This 'blog gives me an outlet to write about the huge number of albums I buy and the many gigs I go to. All of the opinions expressed are my own and if you don't agree with me, then I understand - music is a very personal thing. I like to receive comments, especially if they're nice ones.
View all posts by A.D.S. →
This entry was posted in Album Review, Andy's Album Collection, Music and tagged ac/dc, Album Review, Bon Scott, Highway To Hell. Bookmark the permalink.