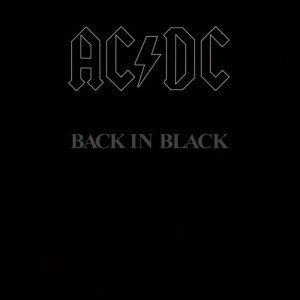 This was a make or break album for AC/DC.  Following the premature death of 33-year old frontman, Bon Scott, owing to alcohol poisoning, the band thought long and hard about splitting up and probably would have done if they hadn’t have been dissuaded by Scott’s family.  Instead, after a brief audition, they recruited down-to-earth, former Geordie singer Brian Johnson, a vocalist who Bon himself had admired and set off to the Bahamas (primarily as a tax dodge) to record their first album with their new singer and their “Highway To Hell” producer, Mutt Lange.  The Bahamas turned out to be not quite as good an idea as was first thought, with their equipment being delayed in customs and heavy storms battering the studios, which are referenced in opener, “Hells Bells”.  With a new vocalist and, also, new lyricist in Brian Johnson, it could have all gone horribly wrong, but “Back In Black”, with its classy sheer black cover (designed to represent the band’s mourning), was dedicated to their former singer and the response to it was phenomenal.  At this point in time, “Back To Black” is the second best selling album of all time, worldwide.

So, do I think this is the classic album it has gained the reputation of being?  Emphatically, yes. It’s a near-perfect, ten track monster of an album.  I’m not the world’s biggest AC/DC fan, but I heard this album once and just had to buy it.  It was the starting point for my modest AC/DC collection and, although there are some superb other albums by the band, nothing tops “Back In Black” for me.  There are just so many classic songs on this record, not least of all the title immense track which has perhaps the greatest guitar riff ever in rock.  There’s also the magnificent “You Shook Me All Night Long”, one of AC/DC’s catchiest compositions, the slightly more gritty “Rock And Roll Ain’t Noise Pollution” and the stomping “Hell’s Bells” which kicks off the album with hard rocking intent.  There’s not a bad song on offer here and even Scott’s rather cavalier attitude to sex carries forward on this album with Johnson penning lyrics Bon would be proud of in “Givin’ The Dog A Bone” and “Let Me Put My Love Into You”, the latter even gaining a special mention in Tipper Gore’s “Filthy Fifteen” list to advise parents about unsuitable lyrics for children, in 1985.

In short, Brian Johnson slotted perfectly into the position left vacant by Scott’s sad departure and it is both a massive credit to him and vindication of the band’s decision to both carry on and to ask him to join them.  Although many fans still talk about the Bon Scott era as being the best, there is very little (if any) malice towards Johnson and the vast majority of people agree that, despite it being a rare occurrence in rock, someone who was considered irreplaceable was, indeed, replaced quite successfully.  For me, the two best AC/DC albums stand side-by-side: Scott’s last, “Highway To Hell” and Johnson’s first, “Back In Black”.  This one, however, is probably not only the band’s finest moment, but one of the greatest hard rock/metal album of all time. If you love rock music and don’t have this album, it really is a must.  I was once a cynic about AC/DC, thinking that everything they release sounds the same, but once I heard this album, about fifteen years ago, my attitude towards them was changed forever.  Yes, they certainly have a sound, but just as every colour has an infinite number of shades, AC/DC aren’t as one-dimensional as casual observers, like my younger self, may wrongly assume.  If you aren’t one of the fifty million people across the world who own this album, you may want to join us…

You are reading the musings of a music-obsessed forty-something who was brought up on The Beatles, lived through Britpop and now spends his time in pursuit of the best music around. This 'blog gives me an outlet to write about the huge number of albums I buy and the many gigs I go to. All of the opinions expressed are my own and if you don't agree with me, then I understand - music is a very personal thing. I like to receive comments, especially if they're nice ones.
View all posts by A.D.S. →
This entry was posted in Album Review, Andy's Album Collection, Music and tagged ac/dc, Album Review, Angus Young, Back In Black, best metal albums, best rock albums, Bon Scott, Brian Johnson. Bookmark the permalink.