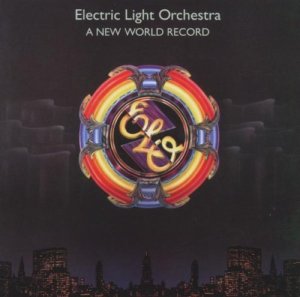 If I was forced to declare that any one release was Jeff Lynne’s masterpiece, it would probably be The Electric Light Orchestra’s sixth album, “A New World Record”. Although “Out Of The Blue” receives more critical accolades, this particular album is as near to perfect as can be, with every single track a fully accomplished piece of inspired craft. From a personal perspective, this was also the first ELO studio album I bought when I was in my mid-teens, once I decided to venture past the couple of “greatest hits” compilations I owned, so it also has a rather special, sentimental quality. “A New World Record” (a title suggested by Richard Tandy, as the album was being recorded in Munich during the 1976 Olympics) is the beginning of an exceedingly prolific songwriting era for Jeff when nearly everything he composed during this time became classic ELO songs which remain well loved and played to this day.

The classy “Tightrope” provides a superb introduction to the album, with the dramatic orchestral beginning giving way to a hook-laden, bright, infectious pop song; it was never a single but probably should have been. The first huge hit of the album, “Telephone Line” begins with a Moog impersonating the tones of a ‘phone when dialling which then leads to an unanswered ringing and Jeff’s desolate, emotional vocals. As one of the band’s best known songs, this big ballad needs no further enthusing about it from me, but it really is one of those perfect moments in rock when a superb composition meets a brilliant performance and arrangement. The maddeningly catchy “Rockaria!” starts with the operatic voice of Mary Thomas (mistake and all) and explodes into a hard, orchestral rock song with strong classical influences, both lyrically and musically. The final moments of the track also builds to a beautifully intense finish to provide the icing on the cake of a flawless three minute pop-rock song.

One of my very favourite compositions on “A New World Record” is “Mission (A World Record)” which relates the perspective of an alien observing life on Earth. It is a sublimely dreamy, drifting, lightly philosophical song, complete with some funky bass-work from Groucutt and has the most wonderful Louis Clark string arrangements. Side two of the original vinyl would have begun with the breezy, upbeat “So Fine”, an infectious track with a Latin edge which then segues effortlessly into one of the Electric Light Orchestra’s biggest selling and most loved hits, “Livin’ Thing”, three-and-a-half minutes of pure pop genius, resplendent with magical, soaring vocals, flamboyant violin arpeggios and a chorus that will refuse to leave your head long after you’ve finished listening to the song. As a lesser-known track and overshadowed by the bigger compositions, “Under The Clouds” is rather gentle underrated and beautiful piece and is just over two minutes of sheer loveliness. Jeff’s decision to re-record The Move’s “Do Ya” (one of his own songs) is utterly vindicated by ELO’s brilliantly overblown version and the string arrangements, as well as a more melodic vocal line, give the already excellent rocker a few extra dimensions.

Perhaps the most precious jewel in the crown of “A New World Record” is the final track, “Shangri-la”. A soul-melting Jeff Lynne vocal guides us through this account of heartbreak and jaded, faded love, with the dramatic, emotional orchestral false ending adding just an extra touch of genius to an already magnificent song. As ever, Jeff’s love of that rather popular sixties group from Liverpool leads to another lyrical reference (“My Shangri-la has gone away, faded like The Beatles on ‘Hey Jude’”) which, to me, is a superb line, but I can grudgingly understand if others find it clumsy. Simply put, “Shangri-la” is a perfect end to a flawless album and this is why I consider ELO’s 1976 album to be their masterpiece, because there isn’t a weak track to be found here, there are nine excellent tracks, some of which are amongst the most remarkable rock/pop songs ever written. “Out Of The Blue”, Jeff’s next album, was to be even more ambitious, but, as a double album, it simply doesn’t have the punch of “A New World Record” and the quality on the record most people consider to be Lynne’s magnum opus is spread out a little further than this intoxicating serving of Lynne’s unique brand of orchestral-fused rock.

The 2006 remaster of the album sees a rather generous six bonus tracks added to this title, the most interesting of which is “Surrender”, an out-take which was originally written for an unspecified film which never came to fruition. Lynne finished the track especially for the re-release of “A New World Record” and it proves to be a likeable, minor key toe-tapper but certainly not anywhere near the same kind of quality found on the nine songs which make up “A New World Record”. An alternative vocal take of “Telephone Line” which is interesting but inferior to the version chosen to be released as well as instrumental takes of “Tightrope”, “Above The Clouds”, “So Fine” and, again, “Telephone Line” give a worthy insight into the excellent Louis Clark arrangements which gave the songs that distinctive ELO character, but they are more musical curios than truly essential material.

You are reading the musings of a music-obsessed forty-something who was brought up on The Beatles, lived through Britpop and now spends his time in pursuit of the best music around. This 'blog gives me an outlet to write about the huge number of albums I buy and the many gigs I go to. All of the opinions expressed are my own and if you don't agree with me, then I understand - music is a very personal thing. I like to receive comments, especially if they're nice ones.
View all posts by A.D.S. →
This entry was posted in Album Review, Andy's Album Collection, Classic Album Review, Music and tagged 1976 classic albums, A New World Record, Album Review, Bev Bevan, Classic Album Review, Electric Light Orchestra, ELO, jeff lynne, Jet Records, Livin' Thing, Louis Clark, Richard Tandy, Rockaria!, Telephone Line. Bookmark the permalink.